Our experience with Moroccan people

As I already mentioned here and there before, Morocco was never a part of my or Matej’s travel plans. None of us just never felt like visiting Morocco. But we did listen to and read so many stories of other people, who did travel to Morocco. It’s always so interesting to visit a destination you’ve heard about so many times. As with every destination, we heard a lot about how Moroccan people are. That meaning if they are kind, hospitable, welcoming visitors, friendly and similar. Travellers and tourists usually like friendly locals, even though the real faces behind smiles are not always what they seem. I will write about it in future posts. Well, opinions about locals in Morocco were divided. Some said they were really friendly, other said the opposite. I tried to not expect anything at all.

Hello Morocco and the first interactions with locals

We arrived to Casablanca in the middle of May and everything was smooth, except the car rental. But we solved the issue quickly and we were on our way. The second day in Morocco, we explored Marrakech. I’ve heard hundreds of stories about pushy sellers on bazaars and other sellers, all offering some kind of services. I was so surprised that no one was actually pushy to us. We did stop and look at some stores, didn’t buy anything and just politely told the sellers »we’re just looking«. They were really ok with that. I’ve experienced much more pushy sellers in other countries. To be honest, it doesn’t really bother me, pushy or not. Everyone’s just trying to make a living. We were so pleasantly surprised at the beginning of our trip. And it continued. 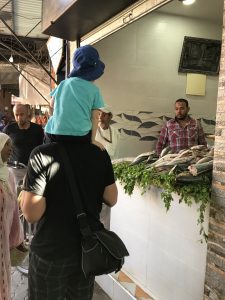 Strolling through the bazaars of Marrakech. (May 2017)

A bit of information about Moroccans

The population of Morocco is almost 34 milion and there are another 4 milion of Moroccans living abroad. Almost 2/3 of Moroccan people are Arabs and almost 1/3 are Berbers. There are also a few other, small comunities. Official languages are Arabic and Tamazight (Berber language), but French is also widely used. The mail religion in Morocco is Islam (99%). Moroccan population has a median age almost 29 years. Berbers are the original inhabitants of the lands that are now Morocco and Arabs arrived in the 7th century AD. Moroccans have a turbulent history and diverse, rich culture.

The smaller the village, the friendlier the inhabitants

In Morocco that was so true. But people were friendly in big cities as well. It was just that we had some more interraction with people in smaller settlements. We mostly stayed in small, family owned riads that always had such friendly owners with whom we chatted about so many things. We felt welcome everywhere we went. There was always somebody in those small villages, that wanted to know something about us. I was so pleasantly surprised, how the prices in stores were mostly very fair (prices are never marked in such smaller stores so you just take what you need and the seller shows you the ammount on the calculator) even though they were so diverse for the same things. Only in Essaouira the guys who sold and cooked fresh fish offered us a ridiculous price and so we just turned away. That’s the only time something like this happened in two weeks.

Friendly owner of a riad in Todra valley showing us Jack, the donkey! (May 2017)

Oh yes, they do. They want to give them kisses, too. Maybe that’s also one of the reasons why we had such great experiences with people everywhere in Morocco. When they saw our kids, they all smiled. I also believe it always helps to be kind to everybody we interract with (well, not just when we travel). All in all, we had really great experiences with Moroccan people. That is one of the reasons that could cause us thinking about visiting Morocco again. Some day.