Since I started with my travel stories from my first journey in India, I just have to continue. There are many stories to be told and each is special, but I have to finish with India first. So I already wrote about my first day in India and my first train journey in India. Now it’s time to say a few words about bus travel in India. It actually is the next thing I did after arriving in Shimla with toy train and explored Shimla for two days. 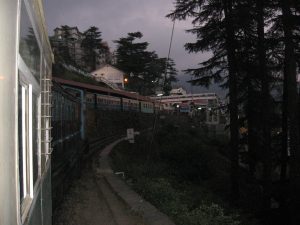 Arriving to Shimla by toy train.

Shimla is such a nice place.

And so clean. It is actually forbidden to spit on the streets of Shimla. The whole city and surrounding area was so refreshing to me after the arrival in hot and busy Delhi. I loved the fresh air and traffic free streets and squares for wandering. It was easy to spend a few days there. I tried more Indian food and snacks, made some new friends and took so many pics with local Indian tourists. I felt like a movie star. It seemed like everyone wanted to take a picture with me. I didn’t understand why though. Wearing my travel pants and t-shirt, I wasn’t even ready to be on all those pics. But it was fun. We had a lot of laughs. In the evenings I was making plans on where to go next. I decided it should be Dharamsala or McLeod Ganj. The place where Tibetan refugees and Dalai Lama live. 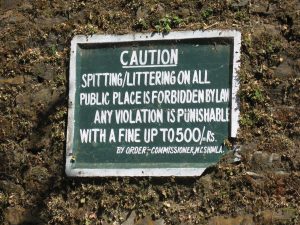 No spitting is allowed in Shimla! 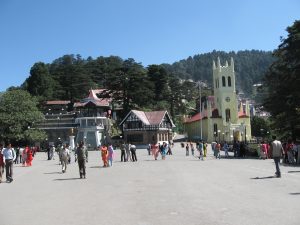 The only way to go from Shimla to Dharamsala was with a bus.

So I went and bought a bus ticket to Dharamsala a day before leaving. That’s what it said I should do in my Lonely Planet guidebook. That guidebook was my everything. Oh, how easy some things would be if we had wifi then. But as long as I had my Lonely Planet India, I felt safe. I was so protective of it and took the best care of it! So in my guidebook it was written the journey by bus from Shimla to Dharamsala would take approximately 10 hours. It said I should bring some snacks. So I bought snacks and a bottle of water and was ready to go the next morning. The bus was already at the station, waiting for clients. I was the only tourist on the bus and since it was empty I had my big backpack next to me. Even though the bus was a typical, not comfortable at all Indian bus, I thought it would be a great ride since it was almost empty. Oh, how wrong I was. 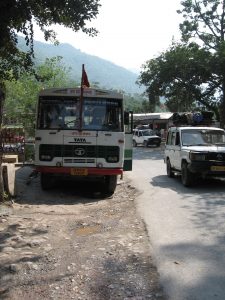 “My” bus from Shimla to Dharamsala.

Of course, Indian bus wouldn’t go for the ride empty!

It was nonsense. Before we even left the driver asked me to put my backpack on the roof and luckily some other traveller, going to another destination, offered to do it for me. He tied my backpack on the roof of the bus and so we left. We were driving around the town for more than an hour, picking up passengers until the bus was totally full. And by full I mean there were more passengers than seats on the bus. And so we went, slowly to Dharamsala. I enjoyed watching the beautiful landscape of Himachal Pradesh through the window. I was actually squeezed against the window so that was the best choice. There were three of us seating on two seats. But the other two were two young girls so it was really ok.

We were driving for more than five hours and there was no stop yet. I was glad I didn’t drink too much of my water and even better, I didn’t have coffee before departure. Well other passengers didn’t seem to mind driving for a long time without toilet stop. Or any stop at all, if nothing else, to stretch a bit. So we had to wait until our driver became hungry. Then he stopped. At the smallest place by the road possible. Where only one person was working. And there was only one toilet. And of course, there was not a single bush (to hide behind) at that place. But I suppose they had the best samosas ever. The driver was happy and we left as soon as he had enough samosas and chai. So my water bottle was almost full until the evening. 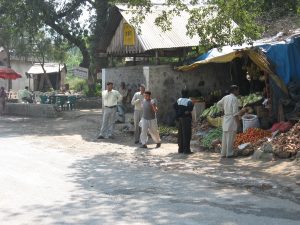 The driver stopped for a minute to buy some vegetables.

Arriving to the destination by bus in the evening.

Our bus was dropping off the passengers here and there about an hour before reaching the final destination. Only a few of us were left when we reached the last bus station. It was dark outside and I had no idea where I was. Oh, and my backpack was on the roof of my bus. I asked the driver if someone can bring my backpack. He told me to just go and take the backpack. And so I did. I climbed up that tiny ladder to the roof of the bus, untied the backpack and carried it back down. Somehow I succeeded without falling. The driver and his helper were watching me and didn’t even try to hide how amused they were. Well, it must have been funny. I see it now. But back then I was a bit scared and my legs were shaking because of sitting for 10 hours on that bus. And since it was dark outside I was suddenly happy there were tuk tuks waiting to take us up to the settlement of McLeod Ganj where all the hotels were.